Thanks to all who attended the 2nd Annual NCDP Dinner and Silent Auction on September 15 at the Dogwood Center!  We were able to raise a lot of $$ for our cause.  Speakers Dr. Rob Davidson, Poppy Sias-Hernandez and Sandy Clarke were wonderful and the food catered by Gala Gourmet was delicious!  Senator Debbie Stabenow also gave a welcoming call-to-action video address.  The auction donations were incredible!  The artwork that did not sell can be seen and bid on in the NCDP office at 26 W. Main in Fremont, where we will continue the silent auction through October 13.  Those who were unable to attend the dinner still have an opportunity to participate! 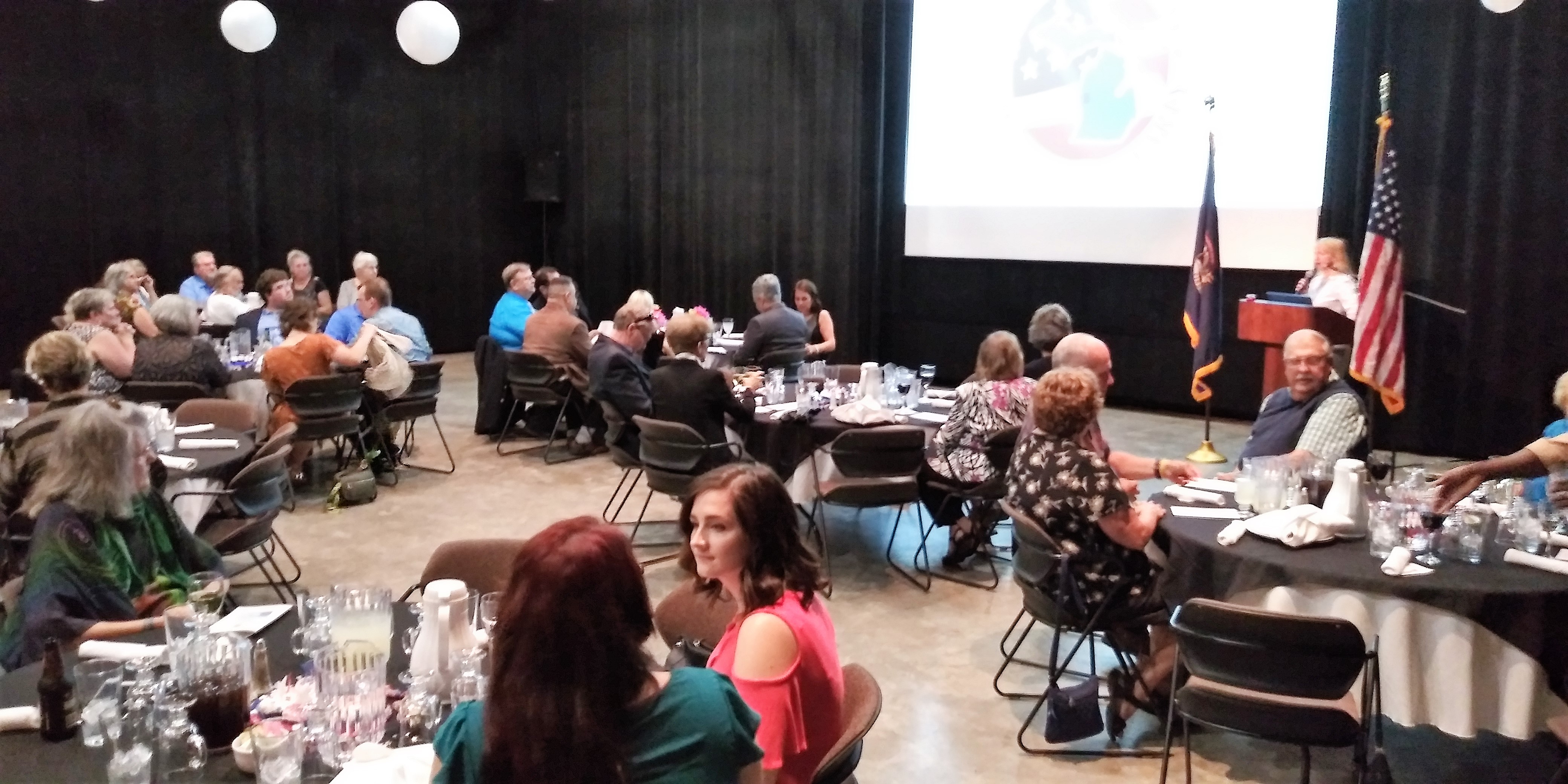 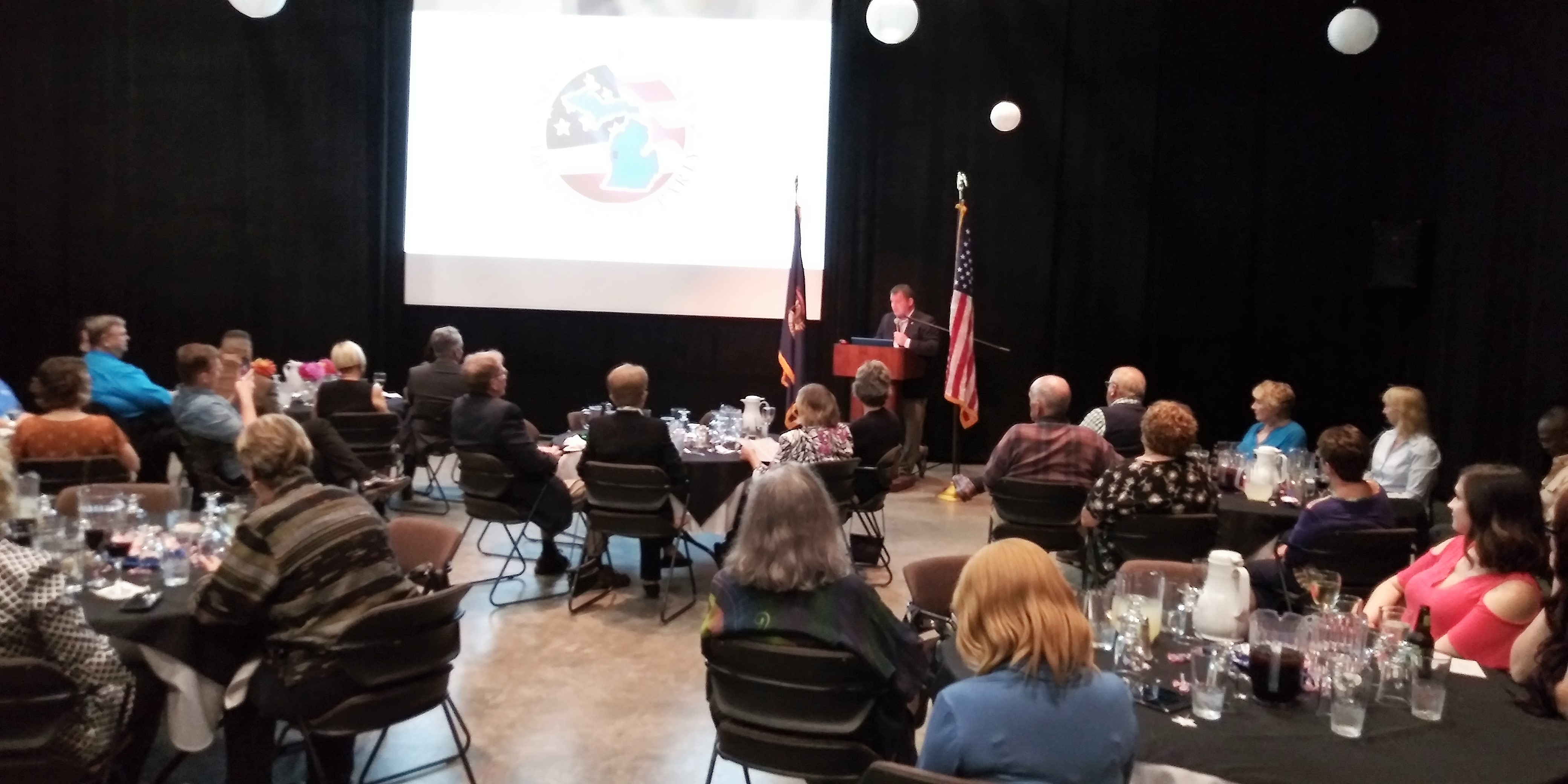 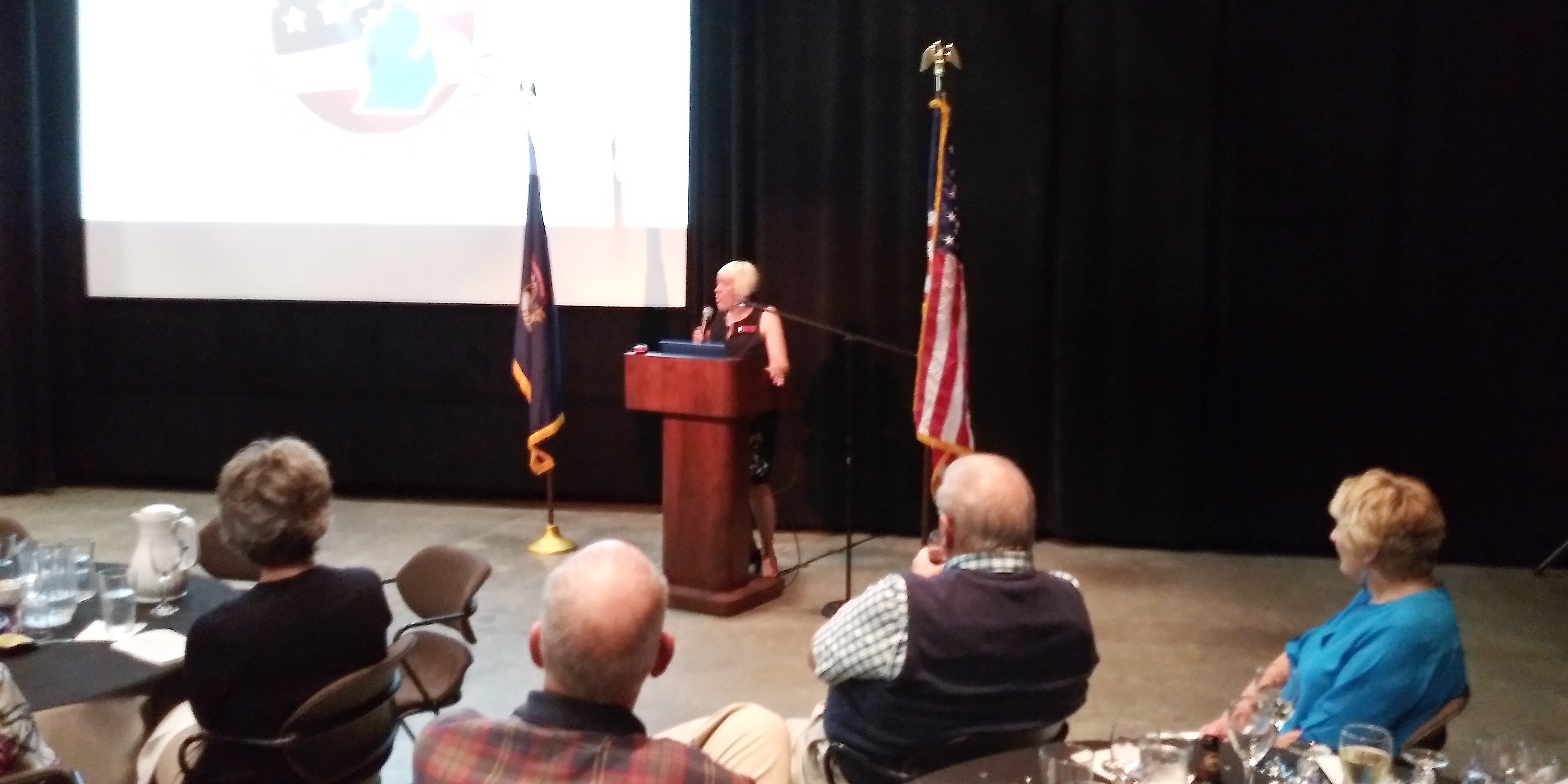 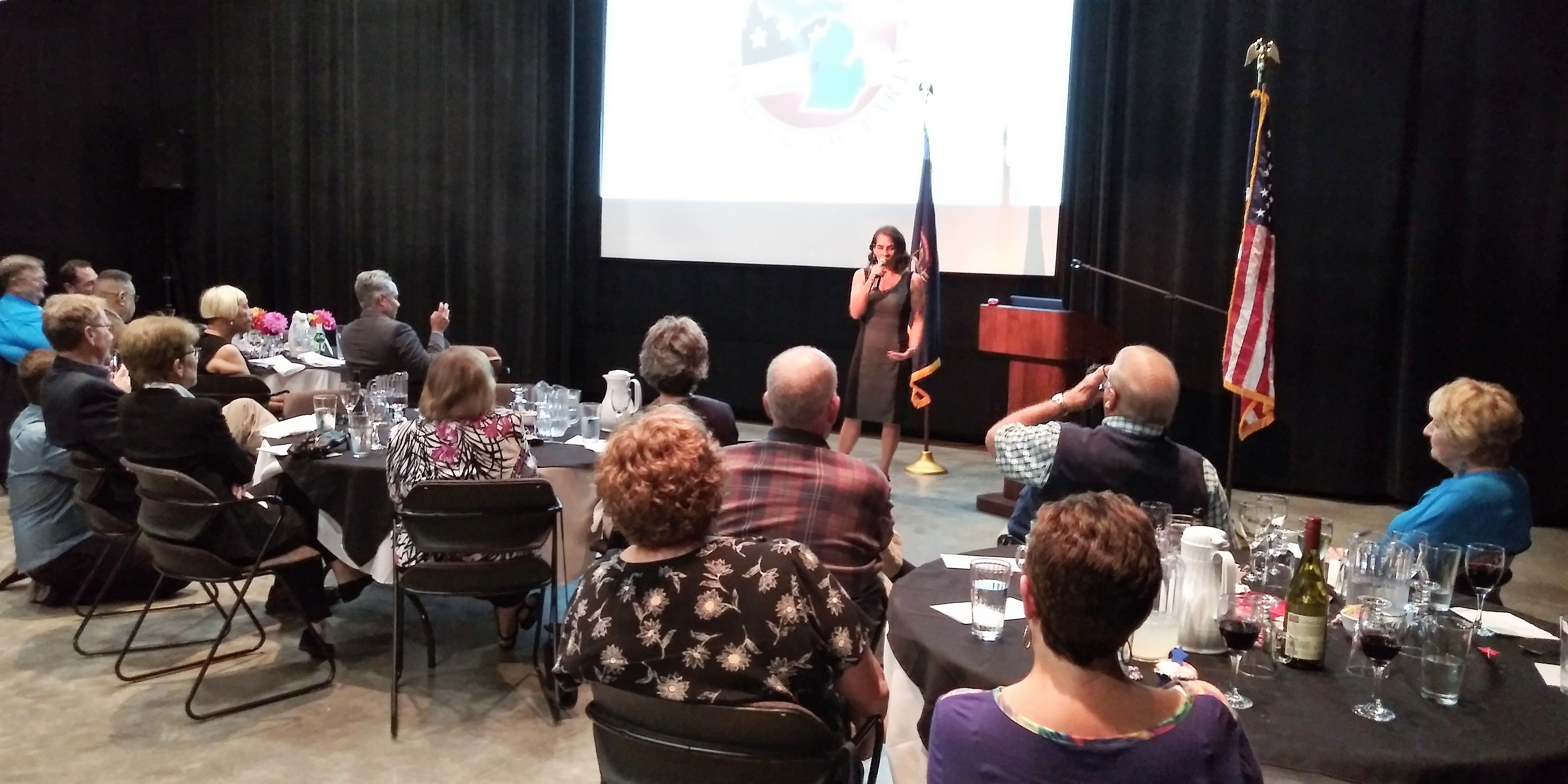 Newaygo County Dems hosted a booth at the Newaygo County Fair. Members helped fair-goers get registered to vote, distributed candidate information and answered questions. Our participation in local events such as the fair, parades and festivals shows our neighbors that Dems are engaged and care about our community.

To keep abreast of upcoming activities, visit our Calendar page 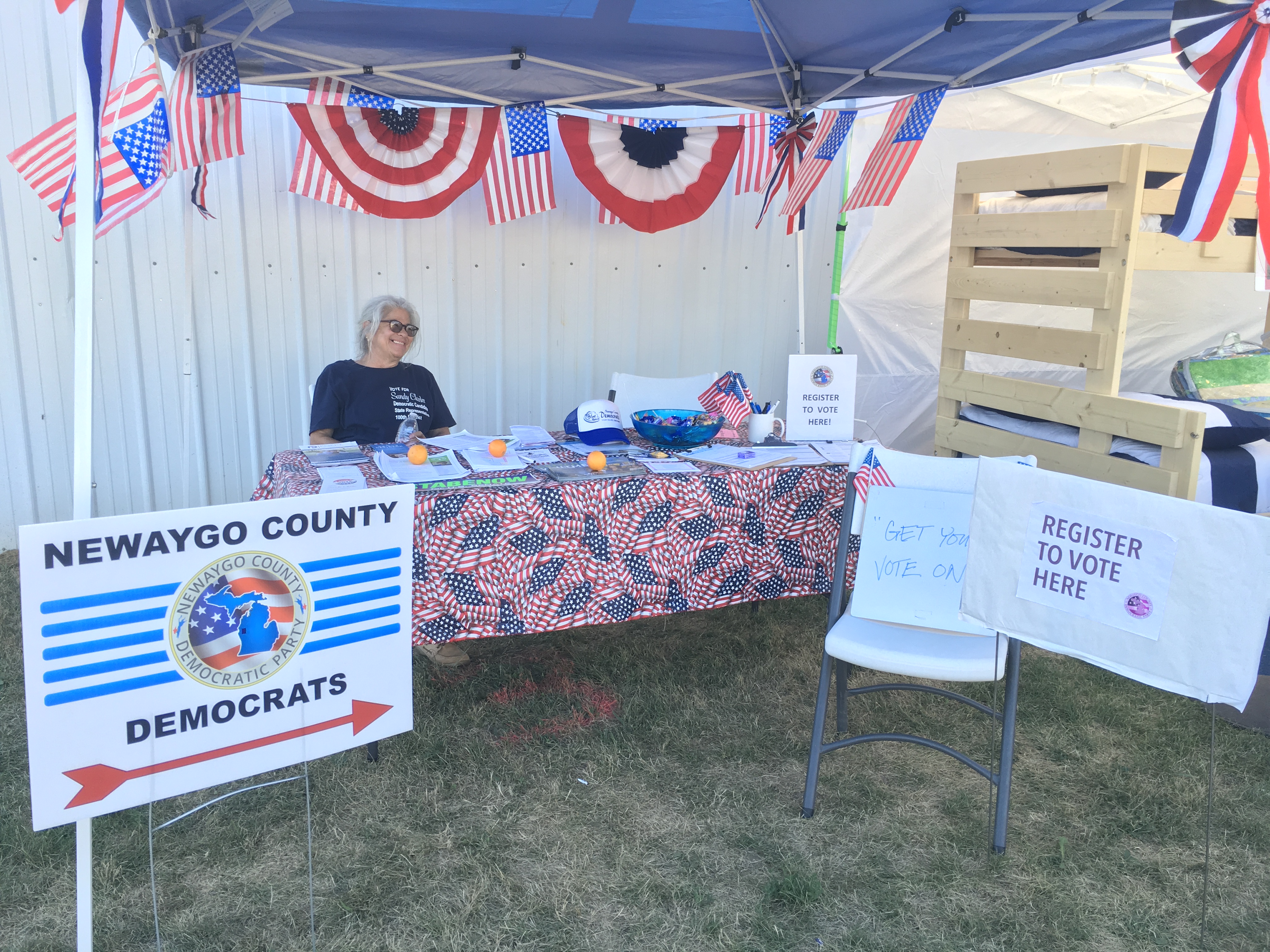 The Newaygo County Dems showed up in force for the Fremont Baby Food Festival parade. The event was on Saturday, July 21. The Dems handed out candy to the kids and informational cards with reminders to vote for the adult spectators. Ours was a lively float with 50’s music, lots of red, white and blue, and very enthusiastic Dems engaging the crowds. Rob Davidson, candidate for U.S. Representative 2nd District, and Sandy Clarke, candidate for 100th State House District joined us. Many thanks to Nancy Pokerwinski for taking these terrific photos. After the parade, we raffled a free bicycle which was won by a lucky girl the day before her birthday! 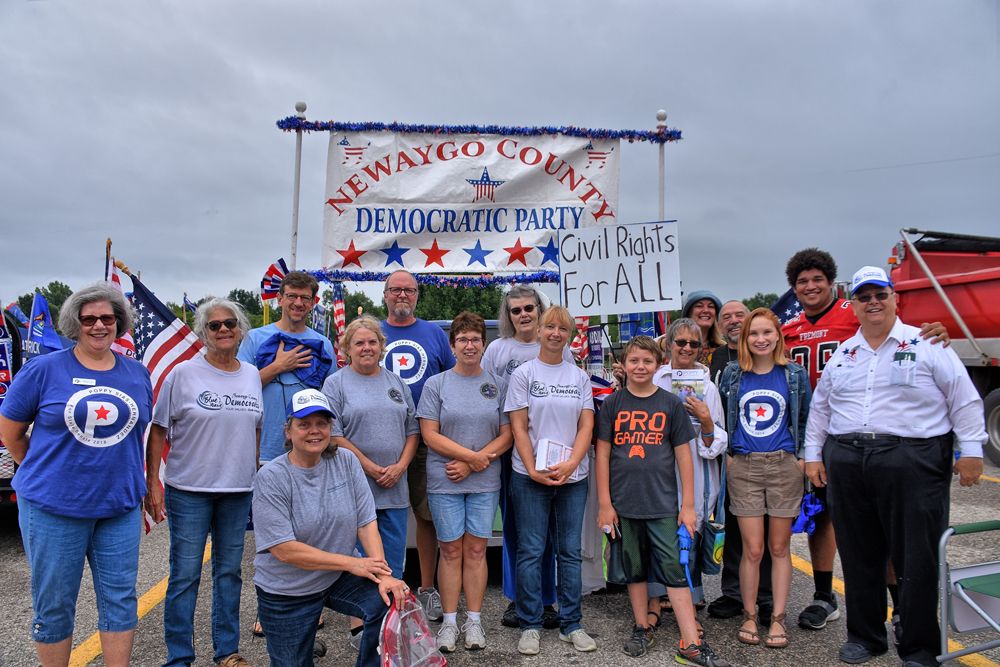 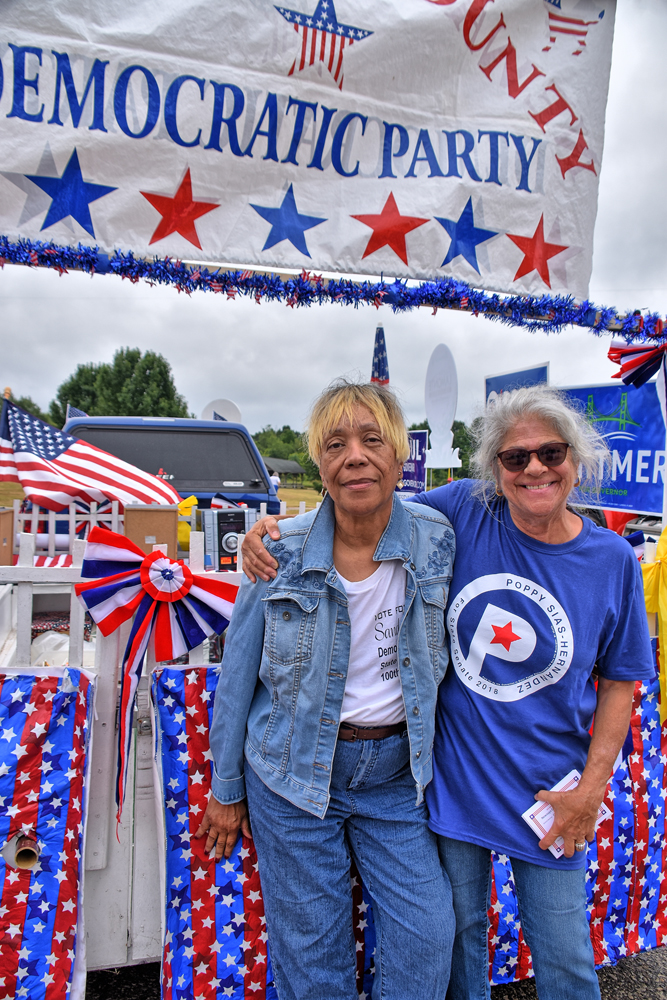 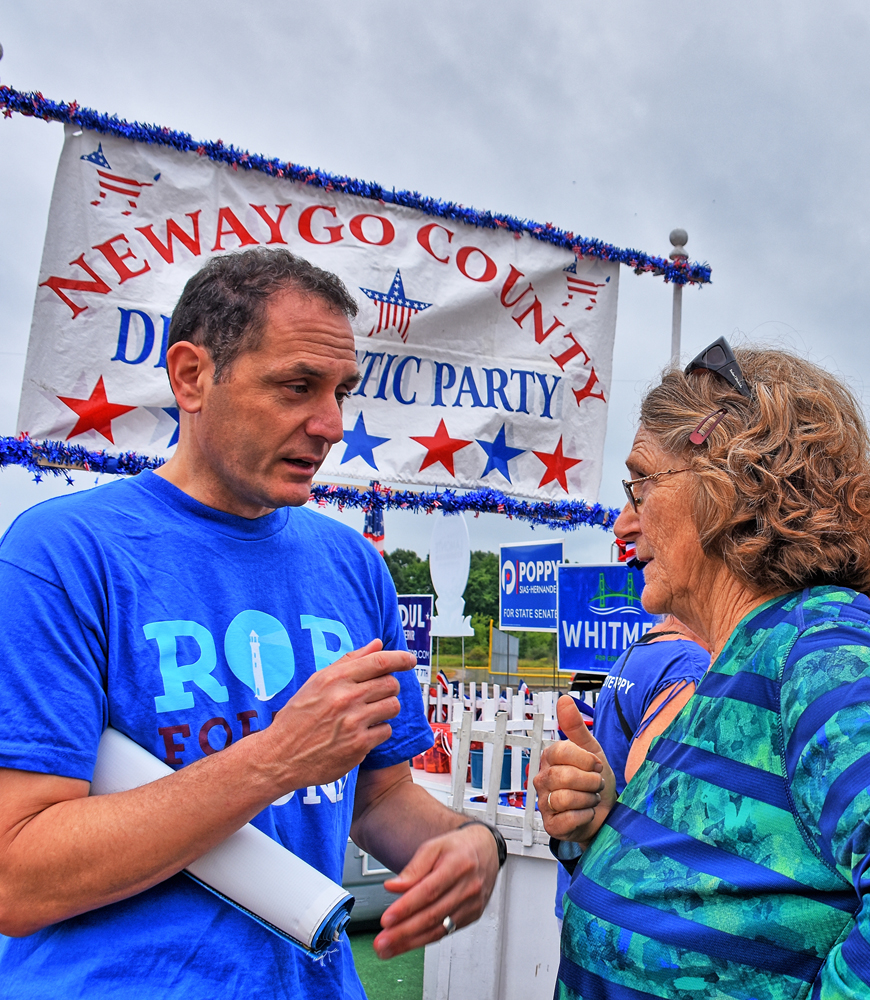 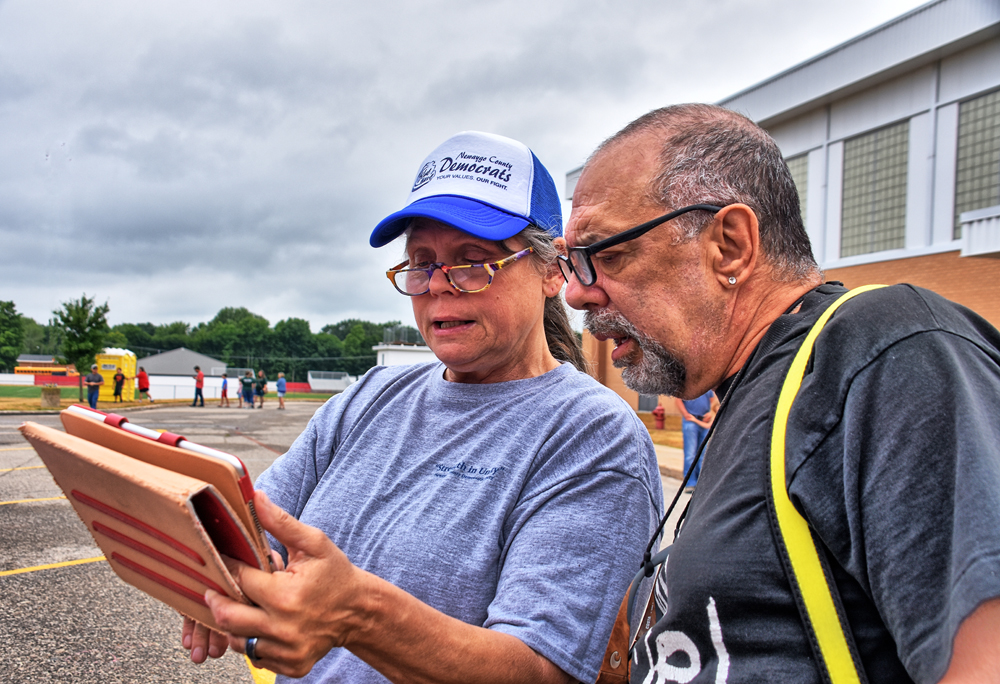 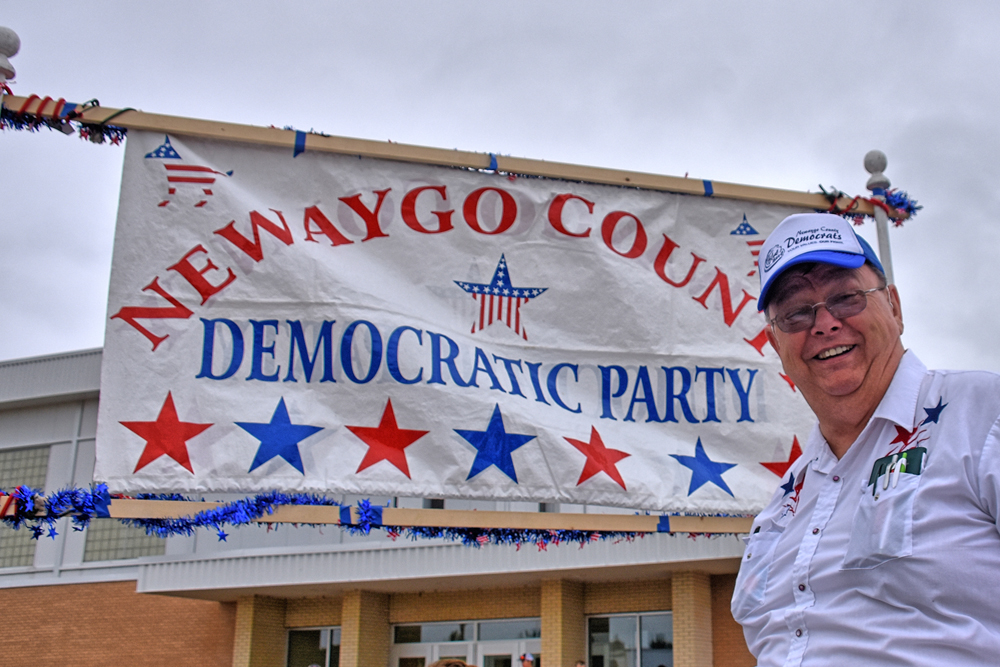 It was a very warm but beautiful Saturday afternoon for the NCDP Golf Scramble and Bowling Mixer. The event was held on June 16 at The Commons in Fremont. There were five teams and several spectators cheering them on. Attendees had the opportunity to meet and talk to three candidates running in upcoming elections: Sandy Clarke, Poppy Sias-Hernandez and Collene Lamonte. 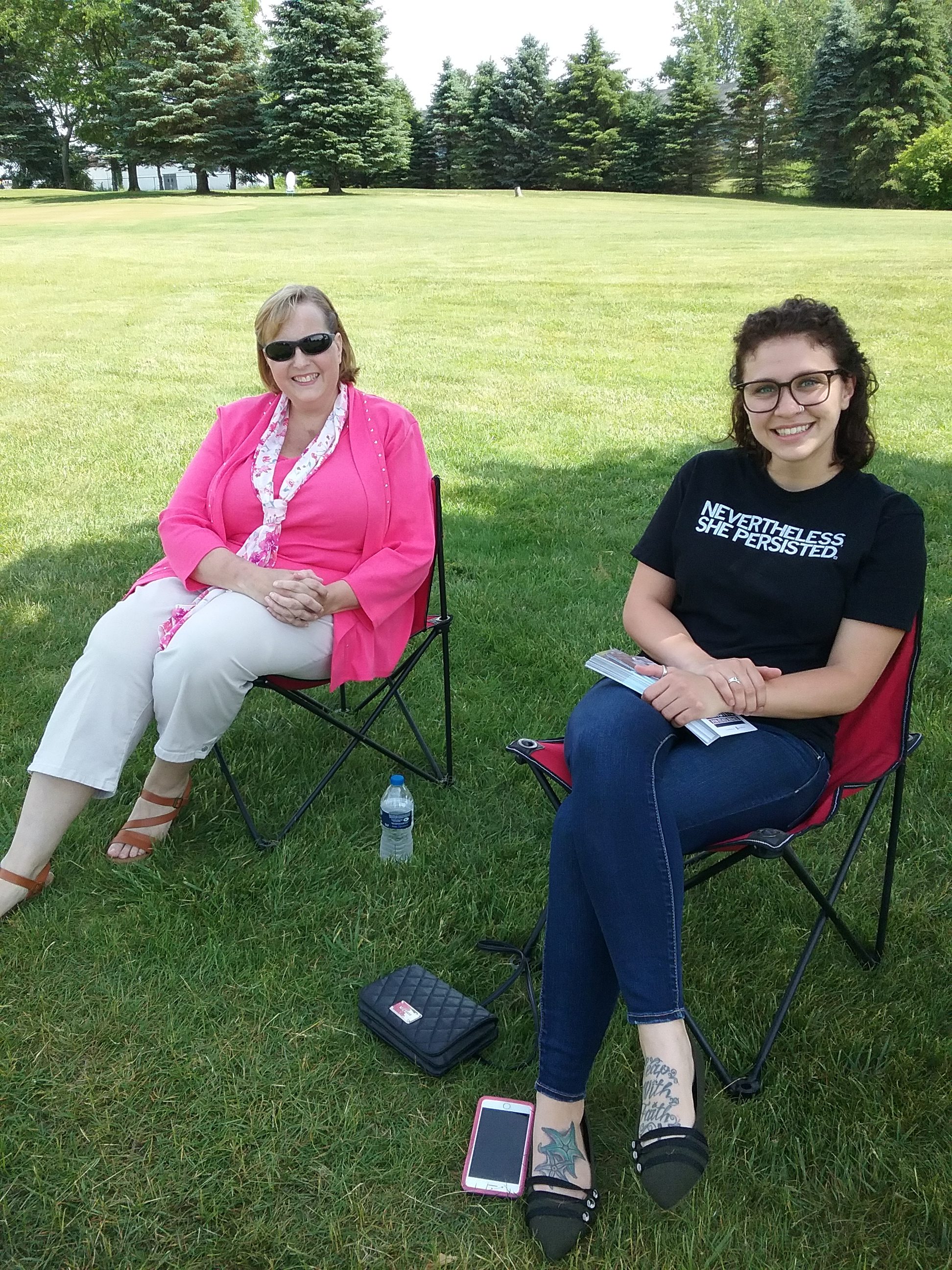 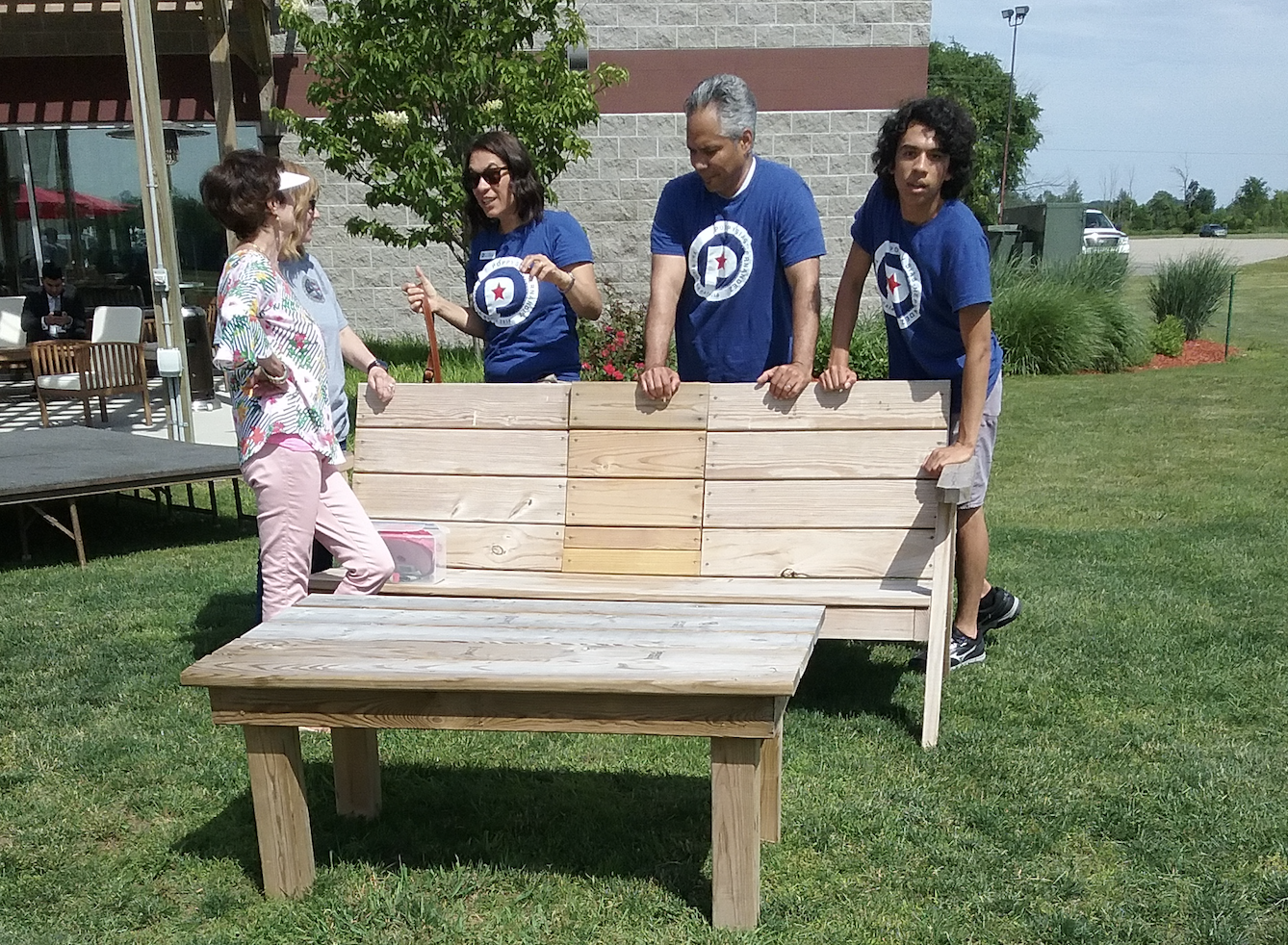 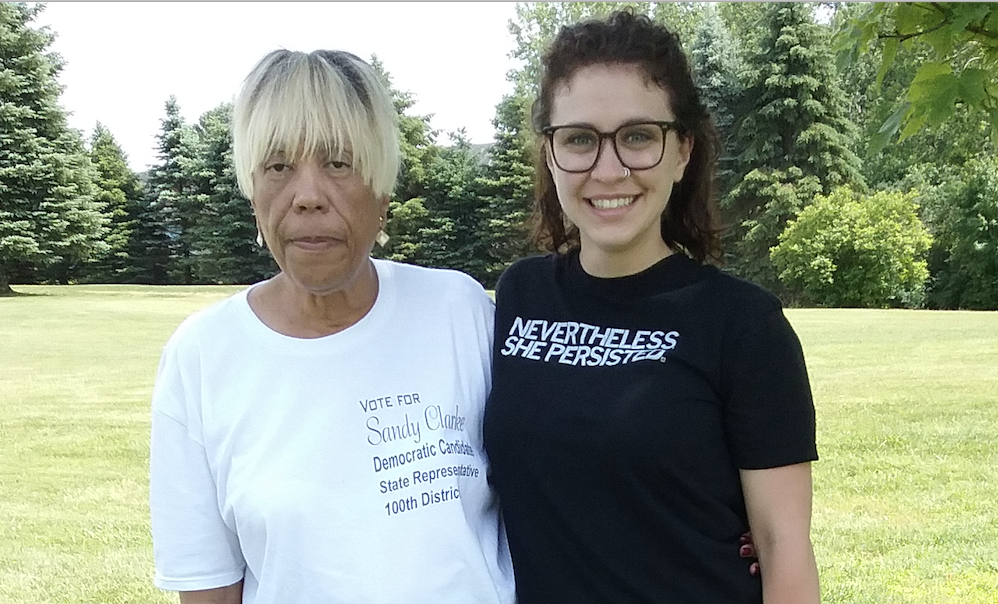 The Newaygo County Democratic Party held its new headquarters Grand Opening in Fremont on May 2. Over 60 people who attended the event had the opportunity to shake hands with three candidates running in upcoming elections.

Poppy Sias-Hernandez kicked off her campaign for a primary win in the Michigan Senate’s 34th District, currently held by Republican Geoff Hansen. Flanked by her staff and husband, Ms. Sias-Hernandez informed the crowd of her desire to get to know the people of Newaygo County and their unique needs as rural Michiganders so she can represent them well.

Sandy Clarke was the third candidate to make an appearance at the open house. She is looking for a Democratic win against Republican Scott Van Singel, who holds office in the 100th District Congressional House.

We will have more events that will include other candidates who could not make it here for the Grand Opening. 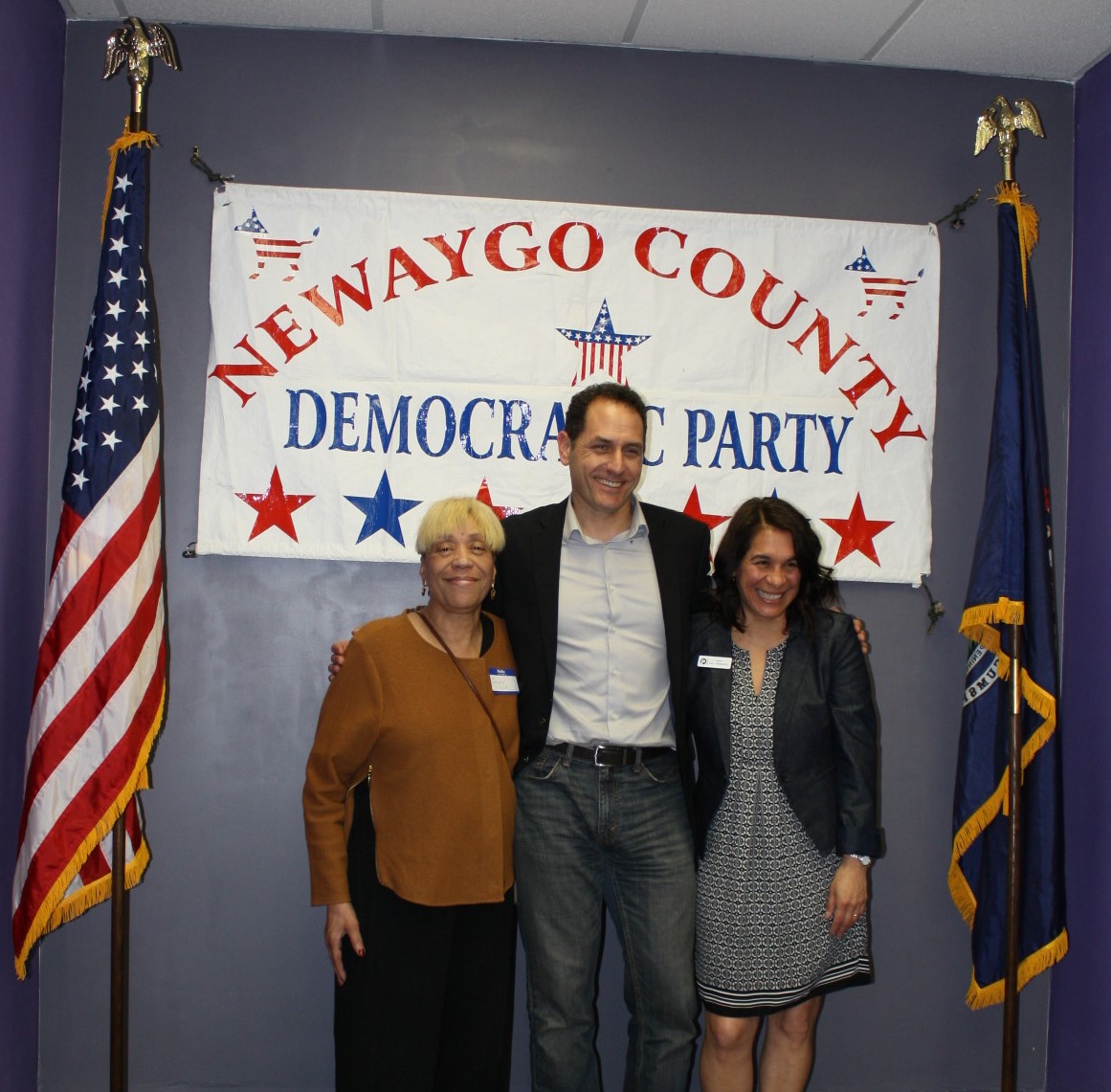 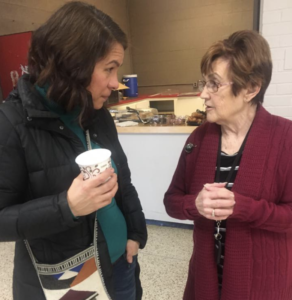 Excellent turnout for Gubernatorial Candidate Gretchen Whitmer at the Fremont Community Rec Center on April 8th. Special thanks to Jan Ross for providing the donuts and bagels for the event. 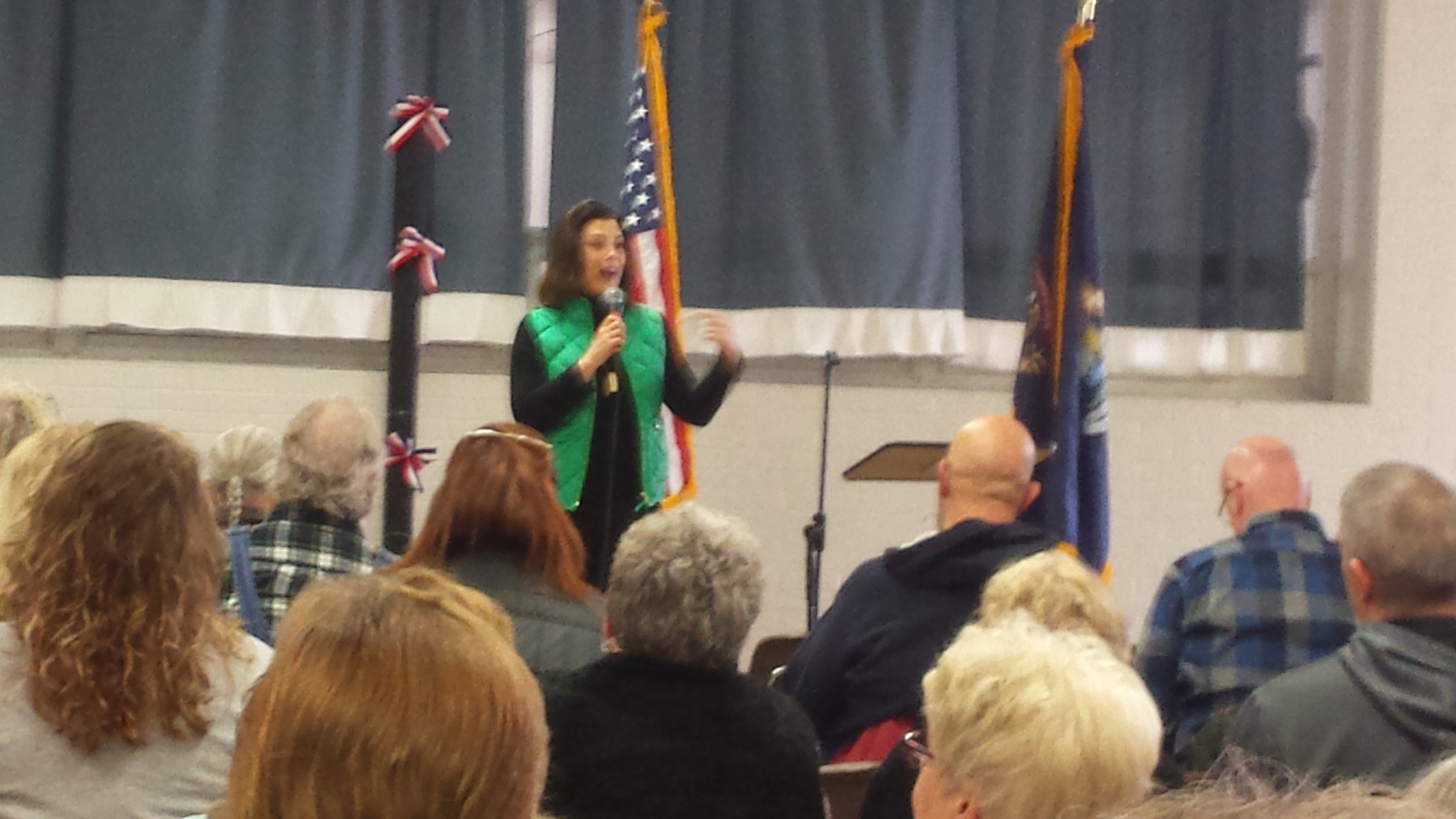 Over six thousand people marched in downtown Grand Rapids on Saturday, March 24.  The event was organized to engage the youth of our community in politics and sensible gun laws.

Thank you to all of the Newaygo County Democratic Party members who participated.

The NCDP hosted two speakers at their monthly meeting in Fremont. The first speaker was Michelle Marciniak from Circles of Newaygo County. Circles is a non-profit organization that brings community members together to build networks of support around families as they move out of poverty.

The second speaker was Dana Nessel, a candidate for Michigan State Attorney General. Ms. Nessel discussed the important role the AG has in protecting Michigan citizens from consumer fraud and harm, and how she would improve the process for people. 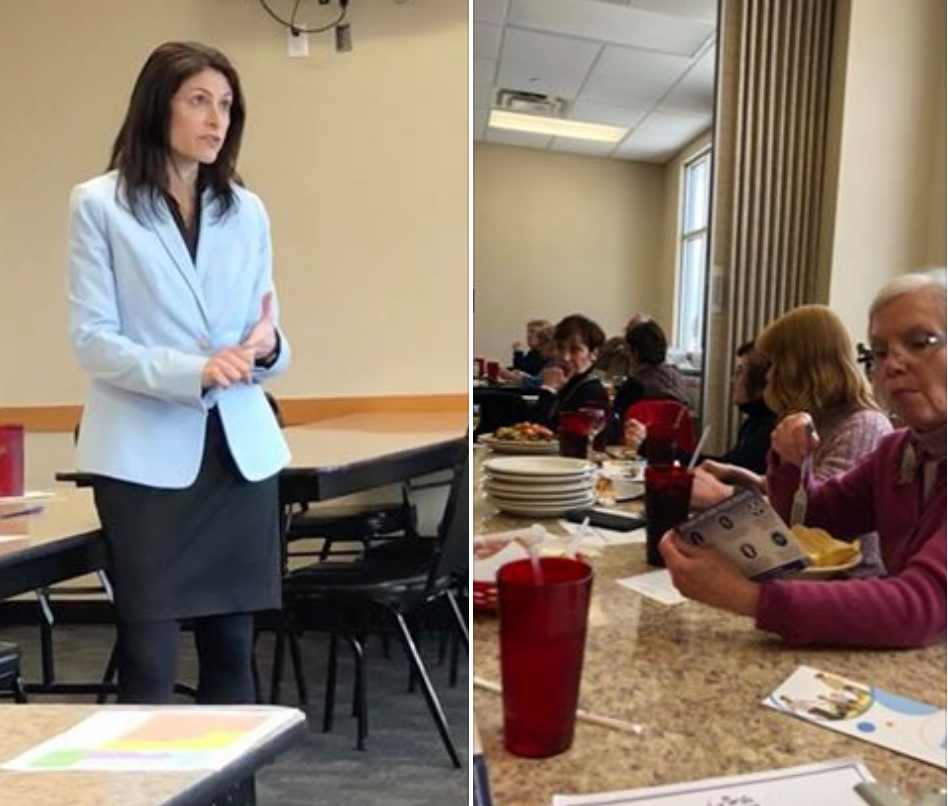 The NCDP hosted a Winter Celebration Sledding Event in Newaygo. This event was open to the community and several people showed up even though the snow did not. Fun was had on a sunny day with s'mores at the fire pit and games inside. The event raised $237 which will be used to send a child to Camp Newaygo.

Several NCDP members braved the cold to join hundreds of people at the Grand Rapids Women's March on January 21. The event focused on equality, advancing human rights, and galvanizing voters to go to the polls in the 2018 midterm elections.